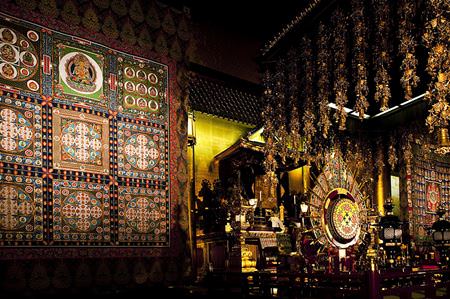 Nishiarai Daishi is a Buddhist temple of the Shingon Sect, Buzan Group.
The temple's formal name is Gochisan Henjoin Soji-ji, and the headquarters of the sect is located at Hasedera in Nara, famed as the temple of flowers.

During the first half of the 9th century (826 CE), Kobodaishi (Kukai) spread his teachings to various places around the Kanto Region. To save the villagers from an epidemic in this region, Kobodaishi carved an image of the Eleven-Faced Kannon and one of himself, placed them in a dried up well and conducted a fire-offering prayer ritual for 21 days.
Legend has it that pure water flowed up out of the dry well and healed the villagers' malodies.
The resurgence of the water in the well located on the west side of the Main Hall led to a new name for the area, Nishiarai, meaning "new well of the west," and also led to the enshrine,templement of Kobodaishi and the Eleven-Faced Kannon in the Main Hall.

In the Nyoirin Hall (Women's Hall / Mobile Map No. 18) on the temple grounds, there is a Nyoirin Kannon that watches over women and to this day is believed to work miracles granting solace and relief. Throughout the Edo period the hall has been well known to women as a prayer site, used to ward off misfortune.

Today, worshippers come from all over Tokyo and the neighboring prefectures in the Kanto Region to Nishiarai Daishi, known for its power to ward off misfortune. Prayer ceremonies include the fire-offering ritual for the attainment of the worshiper's wishes; the initial blessing of new children; and for children's Shichigosan (a festival for children who are three, five and seven years old). 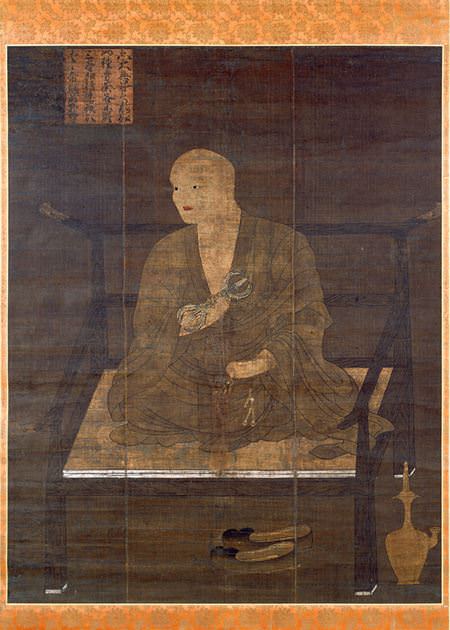 Kobodaishi was born in 774, in what is now known as Zentsu-ji city in Kagawa Prefecture. His childhood name was Mao, and from a young age he studied Chinese texts, poetry, and writings.
At the age of 18, Mao entered university where his education convinced him to pursue the study of Buddhism and to follow the Buddha's path.
His research primarily focused on esoteric Buddhism, where his training led him through journeys in the mountains on the island of Shikoku and in Yoshino in Nara Prefecture. During this time he changed his name to Kukai.

As Kukai continued his Buddhist studies and training, he came to recognize the need to learn more about esoteric Buddhism directly from the Tang High Priest Ajari Keika. He joined the Japanese emissaries traveling to Tang China early in the 9th century and eventually reached the capital city of Chang'an.
Ajari Keika welcomed Kukai and formally accepted him as his disciple, passing on his teachings and training in esoteric Buddhism.

Two years later, Kukai returned to Japan and presented to the Imperial Court a catalog of texts and implements he had collected while in Tang China. Emperor Saga subsequently ordered him to make his residence at the temple of Mt. Takao in Kyoto. Kukai proceeded to proselytize using the teachings of Shingon esoteric Buddhism and conduct prayer ceremonies for the peace of the nation.

Kukai later gained positions at Toji Temple in Kyoto and at Mt. Koya, where he spent much of his time. He also traveled to the Kanto Region and elsewhere to spread his teachings.
Kukai died at Mt. Koya during the first half of the 9th century at the age of 62.

Emperor Daigo posthumously presented Kukai with the name Kobodaishi, a name by which he is still recognized.Today the founder of Shingon Buddhism is often referred to with affectionate reverence as "Kobo-san" and "Daishi-san". 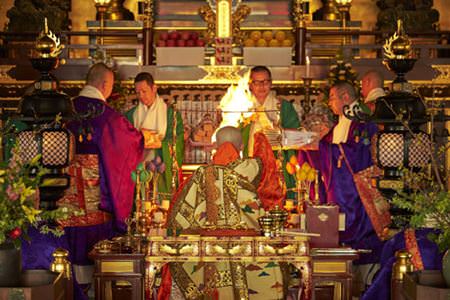 About Inauspiciousness and Warding off Misfortune

The kanji character Yaku (厄) means inauspiciousness, bad luck, or misfortune. The character depicts a person on their knees before a sheer cliff face, struggling to decide whether to go forward or turn back.
"Yaku" as a belief concept is understood to represent a person facing a struggle and/or pain at certain points of change in their lives.

When the two major types of change occur simultaneously, the transition period is frequently accompanied by stress, illness or calamity (misfortune) and is considered a turning point called "yaku doshi" or an unlucky or calamitous year. For centuries, these years have been marked for particular attention to health and safety.
Prayer to the gods and the Buddha during these various turning points in life is called "yaku yoke" or warding off misfortune, and continues today as a traditional custom among the Japanese people.

Nishiarai Daishi is known widely among believers as a place to pray for the warding off of misfortune through the Ogoma Fire Ceremony. This rite was introduced into Shingon esoteric Buddhism by Kobodaishi who brought it to Nishiarai Daishi. The ritual is conducted daily through the burning of wooden sticks that represent human desires (the root of suffering) and to pray for succor for supplicants.